General discussion on all labradoodle-related matters - anything not otherwise covered by specific forums on the site.
Post Reply
10 posts • Page 1 of 1

As a benchmark, how long should a 7 month old puppy be able to hold their bladder for during the day?

Also Holly still has the occasional 'happy wee' when we've been out- an 'I'm so over excited to see you' type wee! (submissive wee I believe is the term?). So, thanks to a can of Pet Corrector, she no longer jumps up at us, but she does occasionally do a happy wee on the floor by our feet (not much - certainly not a full wee, just a tiny sprinkle!) We then of course take her out for a 'be quick' in the garden and she does her full wee there.

Any ideas to get over the happy wees, and how long should she be able to hold her bladder for at this age?

Rhu is 10 months old now and has always done a 'happy wee' when she greets someone one - especially men. But this seems to be getting less frequent. Maybe they grow out of it... (I'm hoping)
Rhubarb 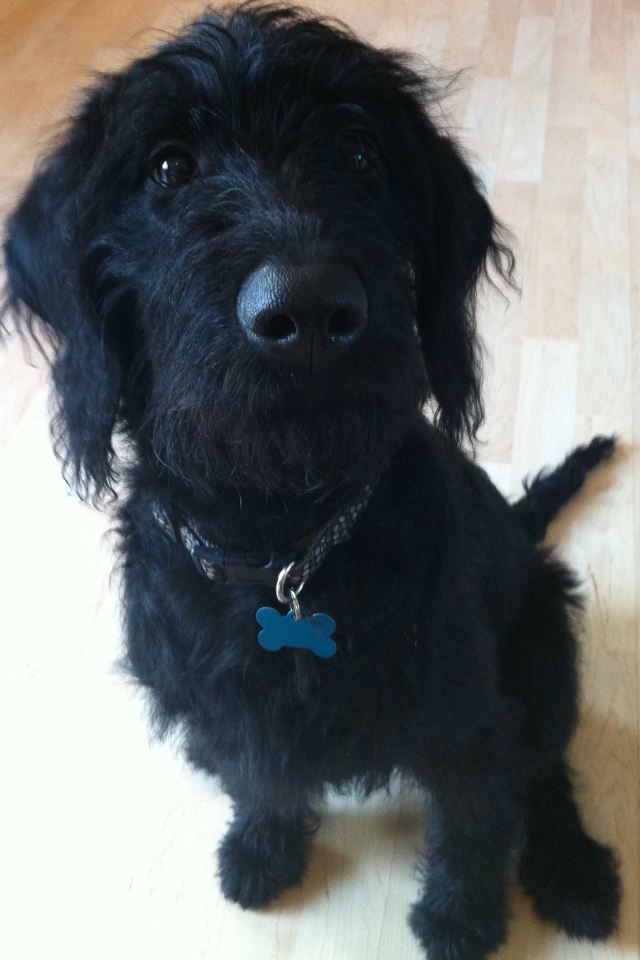 Lara is 16 months old and still does happy wees. especially for me and my son. usually on our shoes

We have tried to ignore her but her whole back end wobbles with excitement and as soon as you talk to her that is it.

With regards to bladder holding, a good few hours during the day at 7 months but i guess it will depend on how much they drink.

Noodles has just turned 2, and still does "happy wees"

There was a link on here a couple of weeks ago which said (amongst other things) that the dog is having trouble reading our body language, and to squat down to their level rather than bend over them to say hello. I've been trying this and it does seem to help. (I also hook my hand under her tummy to lift her slightly, because she only does it when her legs are bent. I'm sure this isn't a cure though!)
Rebecca and Noodles x

I agree that looming over a slightly nervous dog can make them feel the need to look submissive, so being more upright or on their level could help.

I think 7 months is old enough for about 4 hours, but as said it will vary depennd in drinking, levels of activity, and nervousness - they can last a lot longer if they are asleep, or resting

Alfie is 8 1/2 months old and can go without a wee for about 7 hours in the day time and 10 hours over night. Think he must have a strong bladder but before we had him he was left alone quite a lot so seems to have got the hang of holding it from a very young age!
Jo and Alfie xx

Bailey has 'happy wees' whenever my son makes a fuss of her. (she's nearly 3)
Stella has a bladder to die for and can hang on for everrrrrrr

(on the other hand I can relate to happy wee's, coughing wee's, sneezing wee's etc etc

I've just started leaving Sandy at home while i'm at work, rather than take her to my parents. My brother now visits her at lunch time to let her out and play with her. She goes 5 hours without any accidents in the house but I do have to make sure I walk straight out into the garden before I say hello to her to avoid a 'happy wee' in the house. She's 7 months old.
xx Beanie and Sandy xx Sandy at Dymchurch beach by sabinaswithenbank, on Flickr
Top

The submissive wees are a signal that is used by a young puppy that tells others in his/her pack that they're just a baby and therefore aren't any kind of threat. Older puppies/dogs use the same signal to appease other pack members.

Definately get down to the dogs level to greet rather than leaning over to greet Holly. The less Holly feels threatened, the less likely she is to do the submissive wees

I'm sure you're not meaning to make her feel threatened, but if you try getting down on your hands and knees and seeing the world from their point of view you might understand why some things appear a bit scary!

Also avoid direct eye contact as that can make some nervous dogs feel they need to act submissively. Try stroking Holly's chest or back rather than the top of her head when you greet her too.

Hope some of this helps