It's been a while

General discussion on all labradoodle-related matters - anything not otherwise covered by specific forums on the site.
Post Reply
5 posts • Page 1 of 1

It's been a while

It's been a while since I posted on the forum so I thought I'd bring you up to date.We've had Freddy now since November last year and to say it's been challenging is an understatement.He's still very selfish with his toys and so is Barney however we're coping with it,he is still very naughty and still very helpful especially loading and un loading the washer he hasn't understood the concept of putting dirty washing in the washer and taking clean washing out,he just wants to take it out all the while.
Over the last 12 months he has experienced some real challenges he saw his first snow,later on he found daffodils which he just loved biting the heads off and then it came to lawn mowing season he was petrified of the mower.As the year went on it became hotter and hotter and after a slow walk in the morning with Barney who is a bit arthritic and doesn't walk so fast or so far, Freddy had to have a paddling pool to cool off in he only ever went in it once a day but it was enough.His next challenge was our Caravan we'd taken him and sat in it so it was not strange so we took him and Barney to Derbyshire for 3 days which he loved although he was very tired.
Following this success we decided to go further so booked a week in Dorset a 200 mile trip Freddy had never been in the car that long,but we made it it was 6 hours of hell an awful lot of traffic.But he settled and he just loved the sea was unsure of the waves but ran for miles.During this week away he travelled on buses we used the park and rides he licked peoples ears and legs barked when we stopped.But the week ended badly for us as we had an incident with the car and had to be brought home on a flat bed truck.Freddy and Barney were not allowed to travel in the truck they had to ride in the car and not knowing how Freddy would travel I was a little worried what I might find,however the driver was great he stopped a couple of times for the dogs and all was well.We all laughed when we stopped on the motorway he would start barking and people were looking for the dog they never looked up.

The next week away Freddy travelled on trains and buses we were in Norfolk where the beaches are very dog friendly
seeing that it was mid September he just ran and ran and paddled and swam.
And then came November and fireworks it took him 3 weeks to settle afterwards and even now he is a bit wary of loud bangs.
During the last year we've found he didn't like being caged when we go out he sits in the window and waits although he has been known to get a bit bored he's chewed the dvd plug off the scart cable the tv remote he chewed a large hole in the settee and one chair it is a 25 year old leather suite numerous shoes,ornaments he picks up and drops which then break,several pairs of shoes glasses he has had a few ornaments off the christmas tree.
We now go out and leave him and Barney (who sleeps through the mayhem) the ironing board on the settee and a sweeping brush and a clothes line in front of the chair,it's strange he has never liked these.

So that's about it apart from the damage he's done he;s just a normal 15 month old puppy still he still grumbles at us sometimes he'll bare his teeth usually when tired.He's been a challenge but we are retired now so can take him out to tire him whenever we like he is on 3 walks a day. 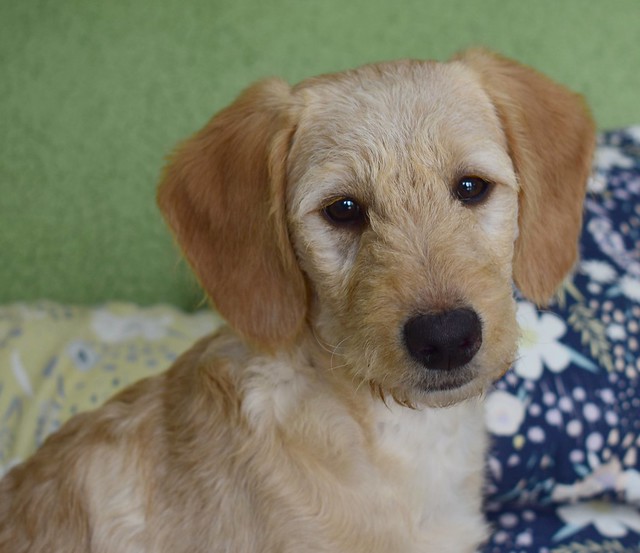 
Freddy at 9 months his first holiday 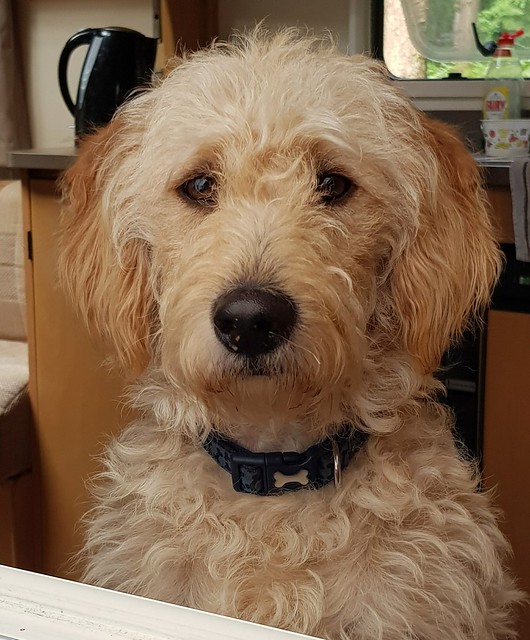 Thanks for the update, I like reading about other peoples experiences with doodles. Have a lovely Christmas.H and D

Lovely hearing other stories My Lulu is now 6 and as calm as calm can be. We brought a puppy into the house who is a live and Lulu is still calm. Lulu needs hugs all the time though. I am waiting for them to love each. Not happening yet. The pup is now one. But as you have found out. Things change from week to week
Lulu & Dx

Love hearing your stories of your pooch. Now if you didnt have Freddy, you would be bored stiff, he is certainly keeping you on your toes.

Have a wonderful christmas, and I hope Freddy doesnt pinch your turkey

It's doubtful if I would be bored,2 years ago we had a large extension built with 're wiring and new central heating,later that year my brother in law was taken ill sadly passing way in September we put our lives on hold for 18 months so there is loads of decorating that wants
(needs) doing but now the boys seem to have taken over,and It's almost Christmas.My new year resolution sod the painting lets go somewhere,my wife has other ideas.
Derek
Top
Post Reply
5 posts • Page 1 of 1