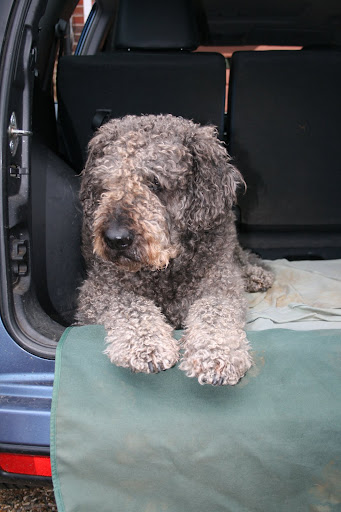 Dougal - what a handsome boy!

Dougal came into our lives in the summer of 1999, a lively and wilful little ball of black fur born in a litter from Ruth and John Bannon’s Blaze and Cathy Cochran’s Wu-Li. We were informed that he was the largest puppy in the litter and that he delighted in waking up all his brothers and sisters in the middle of the night as they slept. My wife had had a dream where I was carrying a large black, leggy puppy, overflowing my arms - we knew that we didn’t need to look any further - he had chosen us.

Full of character and definitely his own dog from the off, he was quite sure what he wanted but always knew where the food came from. He excelled at obedience classes but exercised amazing stubbornness when we got him “out in the field”. He showed an aptitude and willingness to work in gundog training (though this wasn’t put to any use but for being amazed that he never lost his basic whistle training) and from the outset was relaxed and laid back around other animals, calmly strolling by the deer in the park or sheep in nearby fields. Adolescence brought out his wilfulness and he was exasperating at times – if something took his fancy he would be off and you would have no choice but to await the time he chose to stroll on back. We had a superb trainer locally, Sally Chandler, who had just the strategy for getting him straight but still he proved a challenging student as nothing would faze him. We wondered if we’d ever cope but at around 18 months he found maturity from somewhere (probably not unrelated to the removal of his dangly bits!). He calmed down and found his permanent role in our pack.

From his youngest days Dougal was a strong swimmer, his greatest joy was doggy-paddling out for sticks or an old tennis ball at one of his special spots at the River Thames in Molesey or the lakes of Richmond or Bushy Park. In his prime, we would spend all day at Richmond, meeting friends – human and dog - and exploring the smells, embracing nature and experiencing the elements. On Sundays he would be part of the local football activity where he roamed around the children like the most handsome, real-life teddy bear, making friends and mopping up scraps as he went.

He was the gentlest, most tolerant and companionable dog anyone could wish for and he touched people’s hearts wherever he went. He was well known to people in the local community and both my wife and I experienced many moments when we would be out walking with him only to pass people who would promptly greet him cheerily with “Hello Dougal!”, ourselves having no clue as to who they were. So many friends would never have come into our lives over the years but for him.

Among dogs, he was the peacemaker; if there was ever a squabble or commotion he would step in to protect the underdog. He was no wimp and would not be intimidated yet never once did I see even a glimpse of aggression or anger in him. At home, his deep, formidable bark made any caller to the house get ready to step back and maybe make a run for it, at least until they saw that he had an equally impressive tail which wagged constantly, at times left to right or when really animated, in a circular motion, sweeping away anything that got in its way.

In his last six months he faced a number of challenges, first with a major ear operation in June 2009 which also brought to light a heart condition. Following treatment under the care of Prof Dick White in Cambridge, he recovered well and had a few months where he enjoyed a new lease of life. In mid-October of 2009 he was diagnosed as diabetic and we started a course of twice-daily injections of insulin. Though it seemed we had caught the condition as early on as we could have done, a neuropathy quickly took hold and he lost the use of his legs in a matter of days. After a week of caring for him we were referred to the wonderful Greyfriars Canine Rehabilitation Centre in Guildford where Angela Griffiths and her team gave him round-the-clock attention to help him maintain his strength and carried out gentle hydro- and physiotherapy to get him towards walking again while the diabetes was brought under control. He never lost the use of his tail and greeted everyone who visited as a friend whether he had known them his whole life or was seeing them for the first time. The challenge though was just too great for him and Dougal was ready to go home. Following a setback which put him in the vet’s care overnight, we knew what had to be done and the 5th November brought a blessed relief for him and before any suffering took away his handsome body or his dignity and joyful character.

We brought him home and laid him out gently, looking so peaceful and at rest, still our Dougal, but now free. Having prepared a beautiful spot for him in the garden beneath a large bay tree, we held a small service, celebrating his life and thanking him for the joy and happiness he had brought into our lives before placing his body in the ground so he could feed the earth. We sat around the fire and recalled countless precious times we had shared with him.

He leaves a big gap in our lives but we learnt so much from him, and we grew together in life. His journey has been our journey; his walks were our walks and we found Mother Earth together. We will continue to walk that path and he will always be by our side. Having had the chance to prepare and start the grieving process in the weeks leading to his death really helped and when the time came we knew what had to be done for him. His passing, while clearly a sad and painful realisation, was also a beautiful release and the opportunity to honour him in death was a final parting gift from him. As I write this, the tears flow past an unavoidable smile that comes from the fond memories that will always be with me. We were truly blessed to have had Dougal in our lives and are grateful for the joy and companionship shared in the years we spent together.

Goodbye my dearest friend, until I see you again at the Rainbow Bridge.

We thank Gary, Nicky and their team at Manor Veterinary Practice in Hinchley Wood, Angela, Kirsty and all at Greyfriars Canine Rehabilitation Centre in Guildford, together with Clare Rusbridge at Stone Lion and Cameron of Stocton Vets, not simply for the professional care and experience they brought when it was needed but also for the loving and considerate way they looked after Dougal at all times. Knowing that he never suffered and that he had the best possible care right to the end meant so much to us.
Top

What a beautiful and moving tribute to Dougal.
What love and joy he brought into your lives.
So sad to read this, and through my tears I write to offer my condolences on the loss of your beloved Dougal

That is a beautiful tribute to a wonderful companion. I'm so sorry you have had to let him go.

Check this is being adhered to before you buy your puppy:
http://labradoodle.org.uk/forum/viewtop ... =17&t=6560
http://www.labradoodletrust.com
Top

I am so sorry for your loss Mark

A fitting, heartwarming and sad tribute Mark - so sorry for your loss. Run free Dougal.

Oh dear, the tears flowed as I read your wonderful tribute to what sounded a wonderful dog and companion. We all have to face this at some stage. It certainly is a very sad time for you and your family, I wish I could write something to help you but only to say your memories are precious and no one can take those from you.
My condolences
Madeleine

What a beautiful tribute to Dougal. Thank you for sharing your story and photos of him.

You must be missing him dreadfully but you must console yourself with lovely memories of your years together and the happiness he brought into your life.

Our thoughts are with you.

Mark that is such a beautiful tribute to your lovely boy, so sorry for your loss.
RIP Dougal
xx

The love and care you lavished on Dougal shines out from this beautifully written tribute to him, Mark. And thank you for letting us all celebrate his life with the lovely photographic record.

My sincerest condolences on your loss to you and to all Dougal's family.

Run free at Rainbow Bridge Dougal, there are lots of good uns to meet you there.

Farewell Dougal, a Prince amongst Doodles.

What a beautiful and heartfelt tribute Mark. We wish you and your family peace, knowing that Dougal is at rest now without pain or the indignity of suffering long-term illness.

Such a beautiful tribute and wonderful insight into the life of your precious boy. What a lovely boy both in body and soul.
You must miss him so much but thank you for sharing his life with us.

Return to “Garden of Remembrance”